Everfrost will release their new single 'Cold Night Remedy' digitally on 08.08.2017 to announce their second full-length album 'Winterider', which the band is currently working on. Today the cover art and date for the Cold Night Remedy single was revealed, however the proposed release date and cover artwork for the next album is still kept secret.

Cold Night Remedy became one of the first songs written for the album and immediately felt like single material. The song tells about sauna and the role it has played in Finnish culture for centuries, being not only a ritual of cleanliness and place to relax from daily stress, but also in history the holy place of the house and the place babies were born and where people would spend their last days before death. Beneath the surface the song's message turned out to be a great symbol for the concept of the whole upcoming album, escapism.

"The storyline for Winterider came to me really easily after noticing the flaws in the storytelling on our debut album, Blue Eyed Emotion," says Benjamin. "Our singer Mikael and I went to a bar and discussed how we can strengthen this on the next album. It will be more compact and immediate while focusing on one message, how escapism brings 5 struggling people together."

Cold Night Remedy appears in the middle of the album and depicts using sauna to survive in a lake cottage during a winter blizzard.

Benjamin is currently putting the songs together for the album while Cold Night Remedy was recorded and produced early for the single release. "It's weird, rather than writing song by song I write albums as a whole thing, so pieces of the puzzle come together bit by bit. Right now I'm only aware of the whole album in my head, but at a certain point all the songs will be on paper and ready to record," says Benji. "Cold Night Remedy came together very fast though, I was actually in sauna when I came up with the chorus!"

The artwork for the single cover was made by Finnish visual artist, H.Klint. Her unique approach to pixel art presented the band with a good chance to experiment, showing a classic wooden sauna building awaiting a grim storm across the lake. More of her work can be found here!

The single was recorded over 6 weeks beginning with drums by Jope. "Making the song was a little bit different for me than it has usually been with other bands that I've played with," says drummer, Joonas Salminen. "Usually I had to make the drum tracks for the album myself and I like it that's for sure. This time though I got a "ready to go package" from Benji so it was different for sure to practice a drum track which was already kinda ready and ready to record. It doesn't necessarily mean a bad thing. Benjamin had made it so it suits my playing style plus little tricks and shenanigans on the side. Like your favorite dish you try out in a new restaurant ;) of course I added things myself too. So I practiced it like HELL so I could get the best feel and groove to the drums. We think it turned out pretty nicely.The recording of the drums happened at my friend Tomi's studio. We had a lot of fun doing it."

Following drums was something quite new for Everfrost. The band got together with friends from fellow bands Northern Seer and Urja to form a group of 11 to record gang vocals for the song. The guys gathered in vocalist Mikael Salo's parents' living room to record gangs for Cold Night Remedy and also for some of Northern Seer's upcoming album. Footage of this can be seen here from Mikael's vlog!

Over the next two weeks, lead vocals, guitars, bass and keyboards were recorded, with Benjamin finishing the mix at the end of July and mastering by Janne Tolsa from Turmion Kätilöt. The single will be released digitally first through Amazon, Bandcamp and Youtube with iTunes, Spotify, Apple Music and all other digital platforms following shortly after.

The band hopes you all enjoy the first window into a new album this summer on 8th of August! 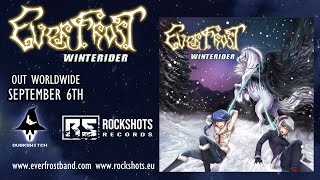